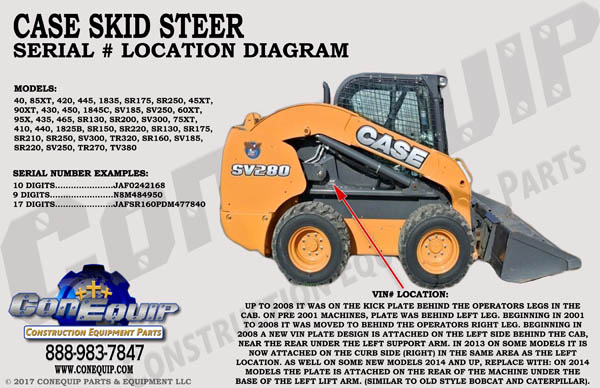 VIN Number Location: Up to 2008 it was on the kick plate behind the operator's legs in the cab. On pre-2001 machines, plate was behind left leg. Beginning in 2001 to 2008 it was moved to behind the operator's right leg. Beginning in 2008 a new VIN plate design is attached on the left side behind the cab, near the rear under the left support arm. In 2013 on some models it is now attached on the curb side (right) in the same area as the left location. As well on some new models 2014 and up, replace with: On 2014 models the plate is attached on the rear of the machine under the base of the left lift arm. (similar to old style Bobcat and Caterpillar).

Request a quote for any CASE Parts with our Parts Quote Form, or call now to speak to a parts specialist at 1-716-836-5069 to get the parts you need at competitive prices.